I discovered Renew after an intense googling, trying to find any information I could about how to heal. My husband of 10 years left me the week my mom died from cancer. I was grieving both events and was sad, lost and angry. I needed to find meaning in my life and randomly came across the breakup bootcamp. I signed up immediately for the next available retreat.

I learned more about myself in one long weekend than I had in years. I took away so much more than I had expected and some of the tools I’ve learned have already come into use.

First of all, I realized I wasn’t there because of my failed marriage. Yes, the divorce was the catalyst but I would soon realize that I was really there to heal from all the other failed relationships I had before I was married. I was repeating a relationship cycle over and over. I would date the same type of guys and change myself to fit their needs, I would give and give to be the perfect girlfriend/wife and expect nothing in return. Once I learned this, I could see it. I could see my patterns. My first major take away was recognizing my patterns and breaking them.

And my biggest take away was learning that I don’t need a relationship to make me complete. I am whole, worthy of love, and that I am enough. And even when a relationship does come along, I can be open to it as long as I am maintaining my boundaries, being honest with myself and not compromising on my dealbreakers.

Shortly after Renew I met someone. I was open and honest and upfront about myself. It was a breath of fresh air knowing that I didn’t have to make myself “fit” and if being myself wasn’t a fit, I could just move on.

We dated for the last six months. During that time getting to know him, I was falling in love. Near the six month mark though, he wasn’t respecting the boundaries I put in place. I caught him lying about smoking – which was a deal breaker of mine I had communicated from the get go. I also heard him get into a verbally abusive fight with his ex and it became startling clear to me that he was not the person for me. I still had feelings for him, but I abruptly ended it.

I wouldn’t have ended it if I hadn’t attended Renew. I would have made excuses for his lie, I would have wavered on my boundaries and I would have tolerated the way he was “still in a relationship with his ex”. All for the sake of not being alone, for the relationship being “good enough”.

Red flags are red flags, regardless of when they show up. Something that would have turned you away initially from a relationship shouldn’t be the thing you ignore just to stay in it.

When I ended it, I wasn’t devastated. I was sad and I grieved the loss, but the sadness and grief were short. My world didn’t fall apart. I was already whole and worthy without him. I fell in love with him, but ultimately, I’m in love with myself more.

I will meet someone one day, but I’m not desperate. I’m not trying to fill a space anymore. I’m a whole person who wants another whole person and I’m not willing to give up my integrity for that.

If you’re going through heartbreak…

If you find yourself feeling like the world has been ripped out from under you. If you feel lost, sad, angry and scared that you’ll never get over it or ever be happy again….

Your answers are out there and you can learn the tools to point you in the right direction. 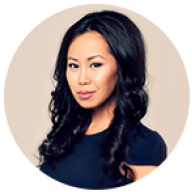 Past guest of Renew Breakup Bootcamp. Sharing lessons learned during my process of healing from heartbreak.

Order my book Breakup Bootcamp and get the REWIRE YOUR HEART KIT for free.Learn More
+